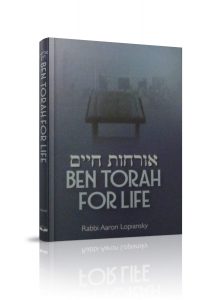 Rabbi Aaron Lopiansky’s Ben Torah for Life is a theoretical and practical guide for kollel graduates to orient themselves away from a life in yeshivah to that in the work world. This is a groundbreaking work. It is the first book in the English language—perhaps in any language—to attempt to diminish the dissonance between the years that one spends in yeshivah and kollel and the subsequent years in which one is in a secular workplace. Some readers of this review may think that this sefer is geared toward a different stream of Orthodoxy than the one with which they identify. I beg the reader not to commit this error. People from a variety of hashkafot—indeed, anyone who strives to a life enlightened by Torah study and values—can and will benefit immensely from this sefer.

There are many very helpful books geared for working frum men and women. In fact I reviewed such a book recently in these pages. (1) What distinguishes Rabbi Lopiansky’s work is that it presents life as a gestalt. This perspective is not new. In a famous letter, (2) Rav Yitzchok Hutner explained to a talmid who was leaving yeshivah that the correct perspective was not to view one’s sacred and one’s mundane pursuits as leading a “double life” but as leading a “broad life.” He used one’s home as an analogy. A person who lives in two apartments leads a double life, but one who lives in an apartment with many rooms leads a broad life.

Ben Torah for Life omits references to the ancient dichotomies of weltanschauung. You will not find here comparative analyses of the various approaches: “Torah Only” versus “Torah im Derech Eretz” versus “Torah Umadda.” This enhances the book because those arcane discussions have always been more the province of scholars in their ivory towers than that of actual wage earners out in the workforce.

Rabbi Lopiansky instead sets out a model elegant in its simplicity: The time spent in yeshivah is a period in which a young man takes on the role of Shevet Levi—“a stratum of undiluted and uncompromised spirituality with a minimum of interaction with the material world.” These years are “the stratum [that] becomes the core of our being.” The subsequent years in the work world are years in which one must find his role as one of the other shevatim—“to know our mission in life and to realize it.” Such missions must be solidly within the framework of osek b’yishuvo shel olam—“the constructive  building and enhancement of the world.”

Accordingly, one of the several questions one must ask oneself in determining an occupation is: “Is it something that adds value to the world? There is nothing prohibited about a windfall or making a quick profit on a deal if it is above board and legal. But if this is the entirety of one’s livelihood, it requires some rethinking.”(3)

Our interface with the world around us is a core concern in Ben Torah for Life:

The core mission of Klal Yisroel is to be an ohr lagoyim and to help reveal the Shechinah in this world. This mission is not just an embellishment; it is the essence of what Klal Yisroel is meant to be. (4) By acting as the Rambam (5) prescribes day-in day-out at his workplace, the working person who behaves with integrity has the potential to bring the Shechinah into this world every moment of his work-day.

Shimon ben Shetach labored with flax. His student told him, “Rebbe, stop. I will buy you a donkey and you won’t have to work so hard.” He went and bought him a donkey from a flax-comber. The owner had hung a diamond on it [and had forgotton about it]. The student came to Rabbi Shimon and told him, “From now on, you need not work.” He asked him why. He told him, “Because I bought the donkey from a comber and he put a diamond on it.” Rabbi Shimon asked, “Does the owner know about it?” He replied, “No.” He told him, “If so, then I am returning it.” [He argued:] “But did not Rabbi Huna Bivi, son of Gozlon, say that one need not return [an idol worshipper’s] lost object?” He replied,  “Do you think that Shimon ben Shetach is a robber? Shimon ben Shetach wants to hear ‘Blessed be the God of the Jews’ more than any treasure in this world!” (6)

Ben Torah for Life is an essential resource for young men devoted to a Torah life and ready to engage with the world.

Rabbi Lopiansky expands at length on this mission and perspective. This, in and of itself, would be enough to make the book an extraordinary contribution. Time and again, Rabbi Lopiansky stresses the importance of behavior that is designed to elicit “Blessed be the God of the Jews.”

Rabbi Lopiansky provides guidance both for those individuals who are successful in their endeavors and for those who have been affected by the vicissitudes of life. His observations are astute.

A lack of assets is much harder to deal with when a person is working than when he is in kollel. During the kollel years, he sees financial hardship as mesirus nefesh for learning. His “possession” is his learning, and the financial hardship is the price he pays for it. A kollel person also receives public recognition for his achievements as well as his sacrifices; he need not be embarrassed to ask for a discount.

The working man has no such positive feedback. His poverty is “inexcusable” and it looks and feels like nothing other than failure.

His suggestions and advice are no less keen.

Somehow we have come to think of kavanah as “thoughts or emotions projected into our tefillah.” Thus, we expect that tefillah b’kavanah includes a mussar shmuess worth of thoughts, or a Kabalah–sefer worth of meditations all flashing through our minds as we say the words. The truth is that kavanah simple means “focus.” We need to focus consciously on the word[s] we’re saying. Looking inside the siddur and focusing on the words that you’re saying is kavanah. Yes, everyone’s mind wanders, but if we gently refocus ourselves on the words we are saying, then we are davening b’kavanah. Many of us know what almost all the words mean, and there is no need to translate them back to ourselves.

This kavanah (which is the correct definition) may not turn the davening into an emotional kumzits, but it will make it into an experience that in the course of time engenders a profound change within a person.

The sefer ends with an addendum on va’adim and appendices of classic, primary sources that touch on diverse, major issues regarding the interface of Torah and avodat Hashem with the challenges beyond the walls of the beit midrash. These discussions alone are worth the price of admission. Ben Torah for Life is an essential resource for young men devoted to a Torah life and ready to engage
with the world.

Rabbi Yosef Gavriel Bechhofer is a Rav and Dayan in Monsey, New York. He recently published the fourth edition of The Contemporary Eruv: Eruvin in Modern Metropolitan Areas (New York, 2020).